Posted on May 24, 2019 by DAN McLENNAN
Posted in STRATA LIVING 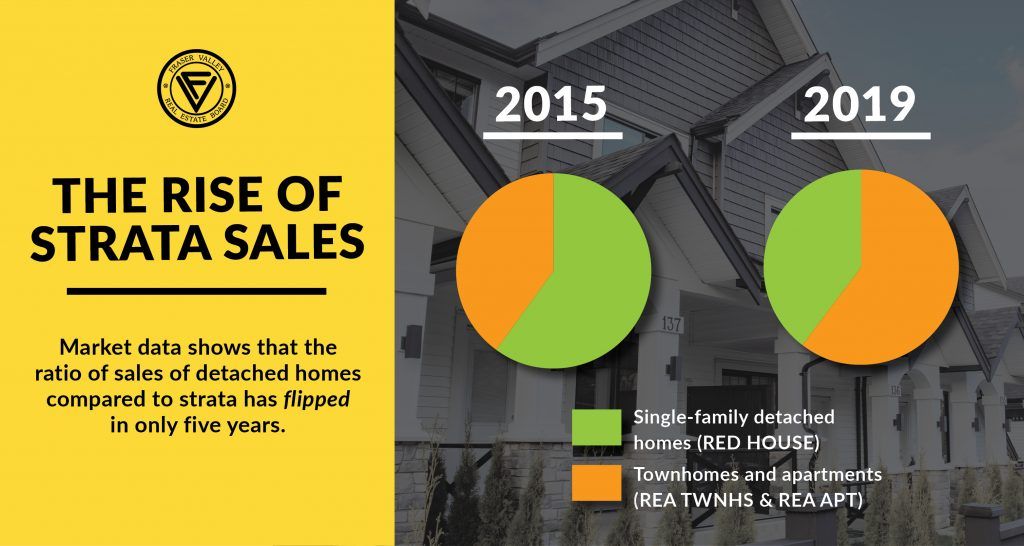 MLS® data confirms that the ratio of sales of detached homes compared to strata has flipped in only five years.

Our infograph shows that in 2015, sales of single-family detached homes represented 60 per cent of Fraser Valley’s main residential market. The combined sales of townhomes and apartments picked up 40 per cent. In comparison to year-to-date sales for 2019, that ratio has now reversed. Combined sales of attached homes now garner 60.4 per cent of our market and detached, 39.6 per cent.

Fraser Valley REALTORS® have been watching the shift towards multi-family housing units for many years now. A myriad of factors impact housing demand, from geography and land scarcity, to population growth and economic conditions. The geographical limitations of being fenced in by the North Shore Mountains, the Strait of Georgia, the border with the United States and the Agricultural Land Reserve in the Fraser Valley, have necessitated a shift in the housing stock toward higher density projects.

The other main reason behind the shift is affordability. Since the introduction of the federal government’s mortgage stress test January of last year, the typical borrower now qualifies for about 18 to 20 per cent less than they used to.  Taking a typical detached home in the Fraser Valley as an example, instead of being able to afford a home that costs $964,600 (the benchmark price in April), they can now only afford a home that costs a little over $735,000.

For buyers, the only option is to save more money or consider buying a smaller or less expensive home. The trend towards attached is here to stay. Given the rapidly growing population of the Fraser Valley, a push for increased density as land supply becomes even more constrained is anticipated. That means that attached housing will become an increasingly important part of the Fraser Valley market and we expect that its share of sales will continue to grow.