BC Housing Demand to Slow Through 2019 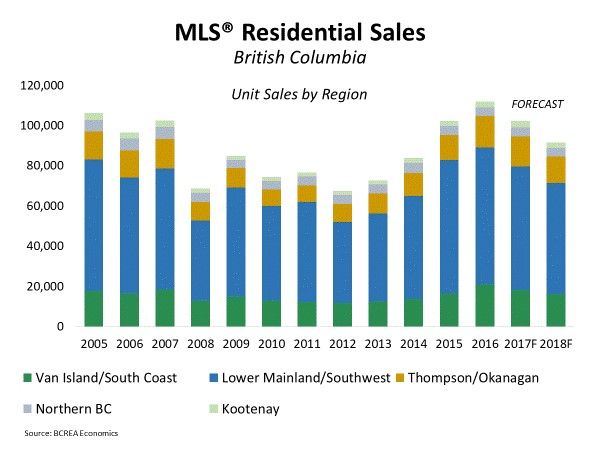 Multiple Listing Service® (MLS®) residential sales in the province are forecast to decline 8.6 per cent to 94,855 units in 2018, after decreasing 7.5 per cent in 2017. A record 112,209 unit sales were recorded in 2016. The ten-year average for MLS® residential sales in BC is 84,800 units. Strong employment growth, consumer confidence and favourable demographics have been highly supportive of housing demand over the last four years. However, slower economic growth, tougher mortgage qualification rules, and a rising interest rate environment are expected to slow the pace of housing demand over the next two years

The supply of homes for sale continues to trend at or near decade lows in most BC regions. However, this condition hasn’t gone unnoticed by home builders. There are over 60,000 homes now under construction in the province, well above the previous peak of 45,000 units recorded in 2008. In Metro Vancouver, over 42,000 units are in the pipeline, 56 per cent more than recorded in 2008. Slowing consumer demand combined with a surge in new home completions over the next several quarters will create more balance in the housing market and produce less upward pressure on home prices. The average MLS® residential price in the province is forecast to increase 6.0 per cent to $752,000 this year, and a further 4.0 per cent to $781,800 in 2019.